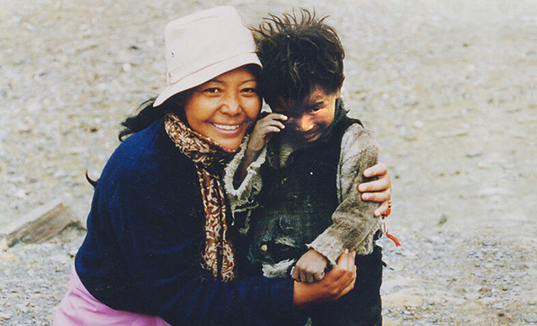 Orphaned at the age of eight, during the failed 1959 Tibetan uprising, Tendol fled to India then immigrated to Germany where she became a nurse, and later helped the Chinese government to aid needy children in her homeland.

Tendol Gyalzur was born in Shigatse, located within the historical Tsang province of Tibet. She was one of the estimated 80,000 Tibetans who were forced to flee the suppression of the uprising against Chinese rule in Tibet.

Tendol was one of the lucky few selected from a refugee camp in India to be immigrated to Germany. Before she left, she engraved the Dalai Lama’s words, which read, “Share your happiness with others” on a tree. Unknown to her at the time, she would one day return to Tibet to live out these words and bring joy and happiness to thousands of Tibetan orphans.

After being sent to an orphanage in Germany, she was adopted by two doctors who ran a children’s village orphanage near the German-Swiss border at Konstanz, where she grew up with eleven other Tibetan orphans.

While living in Germany brought a sense of stability and security, she suffered a culture shock at being displaced and also encountered racial abuse from Germans for the colour of her skin.

After high school, she trained as a surgical nurse, and later met her husband, Losang Gyalzur, originally from Eastern Tibet, who had immigrated to Switzerland. The couple moved to Zurich, and raised two sons.

So how did an exiled orphan return from Switzerland to establish orphanages and nomadic schools across Tibet?

Nearly three decades after she had fled from Tibet, Tendol returned to her homeland, but this time bearing a bright red swiss passport in her hands and Dalai Lama’s words in her heart.

She was moved to open her first orphanage by the sight of street children rummaging through the trash for food in Lhasa. When she took them to a nearby place to eat, the manager at first place refused to let them in.

“It was then, for the first time in my life, I realized that the only thing I wanted to do was fight for the rights of these abandoned children,” she said.

Triggered by her own memories of being an orphan, her spirit to improve children’s lives remained undeterred.

Through years of hard work, perseverance, determination, love, and support, she was able to set up another orphanage in her husband’s hometown of Gyalthang in 1997. Five years later they also established a centre in western Sichuan for the children of nomadic herders.

Unlike other orphanages at the time, which were highly religious, the only faith Tendol propagated was humanity. In an interview she once said her work was practical and pragmatic, “my religion is wiping children’s noses”.

Such was the reputation of Tendol’s labour of love, that people from near and far recognized her orphanages as beacons of cultural understanding, showing what many cultures and religions can do when they unite and set their minds to help children.

In a tense political environment, Mrs. Gyalzur was known for her ability to cooperate with Chinese officials for more than a quarter-century to get her job done. That cooperation, with a government accused of human rights abuses, drew criticism from within the Tibetan diaspora.

Tsering Shakya, a professor at the University of British Columbia saw Mrs. Gyalzur as pragmatic. “You can have your own political stance, but being able to effect change at the ground level is necessary.”

After 25 years, amidst suppression on the work of foreign organizations, Mrs. Gyalzur handed control of her centres to the Chinese government, although she continued to visit them.

As Tendol succumbed to Covid-19 on May 3rd, 2020, at the age of sixty nine, she leaves behind a legacy of service and perseverance.

Through individuals like her, we realize that children are children, people are people, no matter what ethnicity or religion. She showed the world that love is boundless, and through acceptance even dry lands can turn into lush green pastures.