Francis Ngannou: From The Underdog To The Favourite 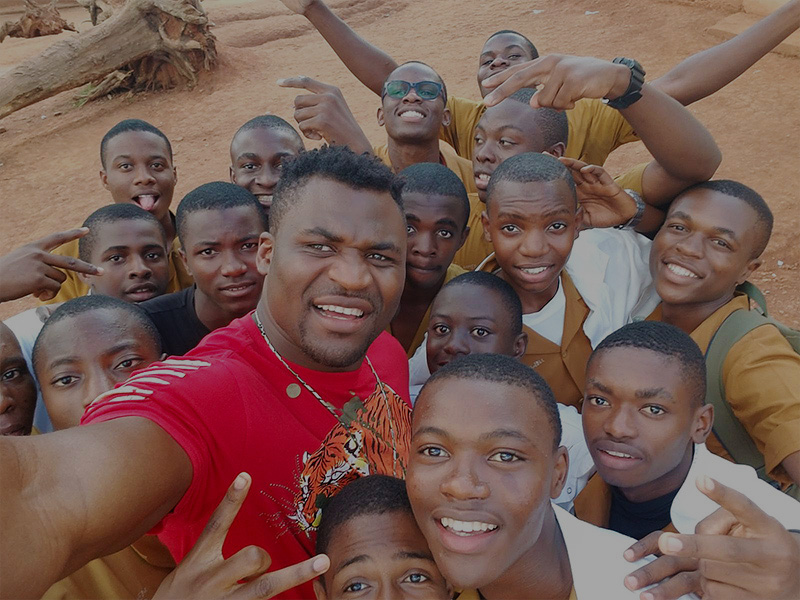 The Story of Francis Ngannou

Francis Ngannou was born in the village of Baite, Cameroon, on the 5th September 1986. Ngannou’s parents divorced when he was just six years old, and was sent to live with his aunt.

Ngannou grew up in poverty and struggled for basic necessities. He stated on the Joe Rogan Experience that he would rummage through bins for food, saying ‘’sometimes you’d argue with a rat in the trash’’.

He also had little formal education growing up. Ngannou went to a school 6 miles away from his home and had to walk 2 hours to get there.

The struggle lead Ngannou to experience a very lonely childhood. He described himself as ‘’staying in retreat’’ and limited socialising with his classmates due to frustration of not having basic items such as a pen or a book – and sometimes even clothes and shoes.

From the age of 11, Ngannou started working in a sand quarry to provide for his single mother, siblings and aunt. He even worked as a motorcycle taxi driver. However, Ngannou’s passion for boxing and determination to take his family out of poverty, lead him to head to Europe to pursue a fighting career.

Ngannou’s 14-month journey to Europe began by going through Nigeria and Niger towards North Africa. In his quest to reach Algeria, Ngannou had to drink from a well infested with dead animals and birds and failed to cross the Sahara Dessert on six different occasions.

Ngannou suffered further ordeals, particularly barbed wire, which he encountered whilst passing through Melila, which left scars all over his body. Once reaching Morocco with just the clothes on his back. Ngannou on an Instagram post stated he was sleeping in the woods whilst trying to find a way into Europe.

After arriving in Tarifa, in the south of Spain, Ngannou was caught by the authorities and spent two months in prison for crossing the Moroccan-Spain border by sea. After his release, Ngannou received refugee status and ended up in France. However, having no money meant Ngannou slept rough on the streets of Paris, dreaming of a pursuing a boxing career by approaching gyms that would let him train.

Ngannou made ends by meet by working at a homeless shelter called ‘La Chorba’, where he chopped vegetables. His life took a turn for the better when the director of the La Chorba Foundation introduced him to Didier Carmont, who ran a boxing training centre in Paris.

Ngannou was introduced to Mixed Martial Arts and went on to receive a professional UFC contract. He is currently the heavyweight champion in UFC.

Ngannou followed his dream to become a professional fighter and now he is a world champion. However, even before the rise to success and fame, Ngannou’s journey highlights how much of a great fighter he has always been.

Whether it was the hardships growing up in Cameroon or the life changing 14-month journey to Europe, through self-belief and determination, Ngannou has successfully fought and overcome various obstacles life has thrown at him.

Much of Ngannou’s philosophy revolves around ‘dreaming’. Ngannou had a dream to become a professional fighter – and through self-belief, he managed to to turn it into a reality.

Ngannou has set up ‘The Francis Ngannou Foundation’ in Cameroon, a non-profit organization created to enable the youth to take action in ways that make positive differences to their lives. Through combat sports and teaching the principles of respect and disciple, the foundation aims to provide children with skills to expand their horizons and realise their dreams.

Ngannou’s story highlights the importance of opportunities, not only how opportunities produce world champions, but more importantly individuals that use their capability to educate, empower and invest in the youth in their native countries to dream big and strive for more.

An opportunity was provided for Ngannou when he reached France. Now he uses his resources to encourage the youth of Cameroon to dream. More must be done to provide accessible opportunities to refugees, so they can continue the cycle to motivate and educate the youth around them.

Just like Ngannou was given an opportunity, here at Sona Circle we aim to provide opportunities to refugees within the UK through employment – to help continue the cycle of education and empowerment which we hope will resonate to the younger generation of people born with a disadvantage.