Journey of a Ukrainian Refugee 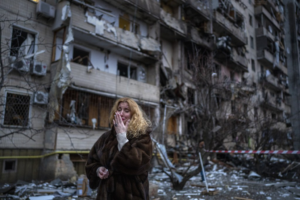 “It’s 3am,” the car radio announces. You try half-awake to follow the headlines, but hear only blurred clamour, punctuated by words that have peppered the past days like a perpetual barrage of bullets: “… Russia … troops … bombed … wounded … dead …”

You switch it off. For the first time since yesterday, you sit in silence, no longer accompanied by even the deep drone of the engine as the car stands deadlocked among countless others, queuing for kilometres in unbroken chains. You look around at the drivers beside you. They too sit silently, their faces drawn and pallid, numbed by fear and the freezing air. You dare not turn on the heaters: every drop of gas is precious hope of making it to the Polish border and escaping the terrors of war-wasted Ukraine.

Mass-exodus, yet ghostly stillness. It’s a strange paradox, broken occasionally by the soft thud of distant shelling, followed by fiery flares on the horizon and the sound of showers of gunshots.

At first, you had been hopeful when the invasion began – hopeful that this night would pass and life would be restored as quickly as it was crushed. But hopes had grown fainter as the war clouds drew nearer, and the future shrank from years to days, to hours until the Russians entered Lviv with tanks and guns, killing all but the present minute.

Your mind winds back to the morning you left. 5 am. You woke to the moans of the air raid sirens over Lviv, like a death wail for the lives that might be lost in the looming assault. Its prediction was right. Hours later you crawled above ground to find bodies, once neighbours, lying in dust and ashes. Across the street, a home had been swallowed into a gaping hole like an empty sepulchre carved out of a bomb-blasted apartment block. At that moment, you knew you could no longer stay.

Your body began to move in ways your brain could hardly comprehend. Without even returning home, you found your car, climbed in and started the engine. It was still alive – now its mission was to keep you that way too.

You drove through Lviv, the town you were born and raised in, now disfigured almost beyond recognition. There were remnants of fire everywhere. The air smelled like smoke, piles of burnt-out equipment lay beside the street like smoking funeral pyres, and flames blackened the walls of a kindergarten a kilometre from home.

Then suddenly there was open fire – shooting and shelling, a storm of debris, glass flying and exploding. People on the roadside were screaming and scrambling, falling to the ground and covering their heads. Some fell forever.

Somehow you made it through, out of the city and past the checkpoints. You joined the slow convoy of cars and buses carrying pregnant women, grandfathers, toddlers, and students, all united by the single aim of safety and survival. You began to head inch by inch for the country’s edge; beyond that, you have no plan.

3:30 am. After fifteen long hours on the road, you approach the border. As you wait, you catch sight of yourself in the rear-view mirror. Until now you’ve felt almost no emotions, blocked by instinct and adrenaline. But seeing your cold, tired face somehow sparks a sudden and unwilling realisation. You’re homeless. You have nothing. You’re dependent on the goodwill of strangers. You’re a refugee.

While fictional, the above journey is based on stories recounted by refugees who have testified of their experiences of escaping the war with Russia. According to the UNHCR, around 4.5 million refugees have fled Ukraine since February this year, and this figure will only continue to rise as the conflict continues.

Follow the link below to support the work of the UNHCR UK in Ukraine and elsewhere, or share this article to spread awareness of the ongoing situation.