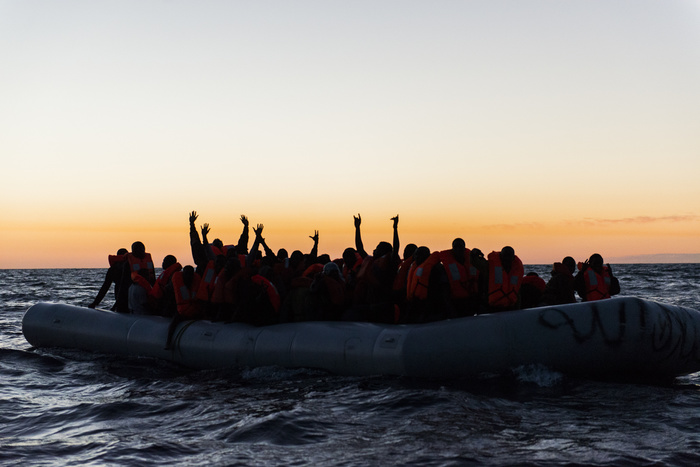 Imagine for a moment…

It is night, pitch black, although by now your eyes have gotten used to the darkness. You’re in the middle of the sea, on a rubber dinghy, and around you a large expanse of water. You’re driving the dinghy. You have no experience at doing this, but someone had to do it so you are taking turns with two others. You can feel the salty water splashing on your hands and on your face as the dinghy makes its way forward in the choppy sea. At the beginning it felt nice, still in the warmth of the day, but it’s been almost two hours now, you are soaked and shivering. Your hand on the throttle is completely numb.

The smugglers asked you for a thousand euros each to make the trip. The dinghy is so packed, there are 50 of you on board, and it feels very flimsy. You can swim but you wonder how many of the others can. There are a few elderly people and several children, some of them very little, also a baby. You’re all wearing life jackets, which makes you feel a bit safer. At least if anything happens, you’ll all float until a rescue boat finds you, right?

What you don’t know is that many of the life jackets are fake; they are made of a cheaper material that will soak up the water, instead of floating. They will actually make you drown faster.

The only noises now are the waves crashing and the high-pitched whine of the engine. Everybody is silent. There was some chatter at the beginning, someone prayed at some point. Now just silence. You are all cold and scared. You don’t even know if you are going in the right direction anymore. Your mind is battling so many thoughts, as you try to stay calm and focused. You remember the last phone call with your mum. You were worried about her safety and she was so scared about this crossing. You had a hard time convincing her it was a good idea, pretending to be convinced yourself.

You had heard so many stories about this over the past few weeks, a family you met had tried to cross but they had almost sunk. People were desperate. Another couple told you of their first attempt, they had made good progress at the start but later they were approached by another boat which forced them to stop. It was terrible, they said, everybody was screaming, the men on the other boat took their engine and left them to drift away with the current, back towards Turkey. In both cases they were eventually rescued by the Turkish Coast Guard, and back to the start.

That’s why everybody was saying it was better to make the journey at night, less chance of being seen. However at this point, you’re not sure if it really was a better idea anymore, you’re starting to seriously worry that you won’t make it.

This is the story of thousands of people every year, trying to cross the stretch of sea between Turkey and Greece, to seek asylum in Europe. Many people attempt this journey multiple times, as they are caught and sent back. Some lose their lives, too many. This is just one leg of a perilous journey so many are forced to make as they are forced out of their home country. They are fleeing war and bombings, the fear of snipers in the streets of their home town, oppression for speaking up against a certain regime or persecuted for their religion, ethnicity or sexual orientation.

In the absence of a safe and legal path to seek asylum, the only option they are left with is to put their lives in the hands of the smugglers, and at the mercy of the sea. They risk their lives in the search of safety. Isn’t this ironic?

“…like a wave that never breaks”, that’s how they teach you how to recognise a dinghy on a night vision telescope during spotting training.

In autumn 2019, I joined Lighthouse Relief as a volunteer in the emergency response team on the Greek island of Lesvos. The NGO assists boat landings on the North shore of the island. It involves looking out for incoming dinghies to alert search and rescue vessels. It is a crucial job to reduce the risk of fatal incidents during the last part of the crossing, made so dangerous by the conditions, the inexperience, and the rocks. It also involves providing first response and support to people arriving on the shores, which is so important after such a terrible journey, with emergency blankets, food and tea, dry clothes and warm shelter for the night, along with first aid whenever necessary.

In March 2020, just before the coronavirus pandemic hit this corner of the world, the situation in Lesvos was critical. Turkey opened its borders and there was a big increase in the number of people attempting to reach Europe. Simultaneously, there was a surge in attacks on migrants and NGOs perpetrated by extremist groups. This forced many humanitarian organisations to suspend their operations.

The situation now post COVID-19 is even harder due to the restrictions imposed to contain the spread of the virus. My thoughts go to the migrants who are forced into even more precarious conditions and to the locals and NGOs who are trying to manage the situation with humanity and courage. The work of organisations like Lighthouse Relief will continue to be much needed, until Europe provides a legal and safe way to seek asylum. Until then, sadly, people will keep on entrusting their hopes for a safer life to a flimsy dinghy, like a wave that never breaks.