Don’t fall for the Government’s lies this Pride Month 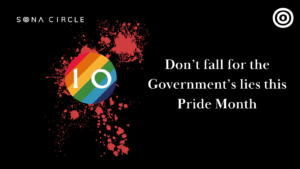 Every June it’s the same.

The same companies post their same slogans. One multinational corporation will make a big gaff which everyone will laugh at. However, it’s easy to forget how the same wet platitudes are made by our own Government. The official 10 Downing Street has changed it’s background to a rainbow, and the Conservatives will say that they stand for LGBTQI rights and against discrimination. Yet their empathy seems to run out, like it does with many issues, when it comes to refugees.

LGBTQI liberation should mean liberation for all, not just for those who are seen as being part of the national in-group.

At the border LGBTQI refugees are often forced to ‘prove’ their sexuality and gender identity in order to explain why they face persecution in their country. Even so, these individuals are often disbelieved as these are difficult things to ‘prove’ on the spot.

LGBTQI individuals are often more likely to become refugees. For example, many LGBTQI individuals who have travelled to the UK for work or to study may find that during their time here things have shifted politically back home or that their families aren’t welcoming them back due to them coming out. This leaves LGBTQI people stranded in the UK, and they would thus be considered refugees.

However, applying to become a refugee isn’t a good option either, as refugees are forced to live in detention centres where they could face further persecution and would have to give up their job or other sources of income.

After the Government announced the Rwanda policy, many have pointed out how dangerous Rwanda is for the LGBTQI community. Last year, Human Rights Watch disclosed how Rwanda detained over a dozen transgender and gay individuals alongside sex workers and homeless children ahead of an international event taking place in the country. The detainees were told by officials that they did not represent the values of Rwanda and were more likely to be beaten if the guards knew they were transgender or gay.

In 2021 our own government criticised Rwanda’s human rights policies, but now claims that Rwanda has totally transformed itself over the past decades.

While gay marriage is technically legal in Rwanda, hate crimes are not criminalised, and because of this many keep their sexuality or gender identity a secret.

So when the Government flies its rainbow flag this June, remember the red blood that lies beneath.